War of independence or: how a toilet is helping the fight against MS

One man’s fight against the degeneration caused from Multiple Sclerosis is taking place in….the bathroom.

Ian Westgate (64), from Eastbourne, was diagnosed with Multiple Sclerosis more than 30 years ago, but has always fought against the illness’ impact, to the extent he is a leading campaigner for accessibility in the area, and chair of Eastbourne Access Group.

As his condition has deteriorated, requiring greater input from his wife Clare, he has “succombed” and purchased a Closomat Palma Vita shower (wash & dry) toilet.

“I wish I’d got it years ago!” he now says. “I made every excuse under the sun against having a shower toilet, but realised that I wanted to keep my dignity, safety and independence in this most private of functions. I was getting more and more worried about transferring to and from the toilet, about falling but didn’t want to rely on Clare to help me. And I was having problems with constipation. We looked at all the options in these ‘smart’ WCs, and when I realised I could have support arms added to the Closomat, it sealed my choice.

“It is the answer to everything I need to go to the loo- I can even, as the engineer explained, trigger the washing to help stimulate movement. I wouldn’t be able to manage without it now.” 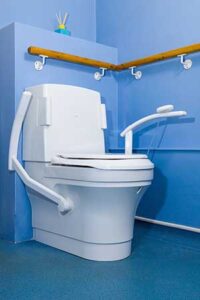 The Closomat has been installed in place of a conventional WC in the bedroom with wetroom adaptation Ian and Clare created by converting the garage at their home. In addition to the integrated support arms, Ian has ‘future-proofed’ his toilet and specified his Palma Vita with touch sensitive hand switch and a shower chair for over.

Adds Ian, “I don’t use the switch and shower seat yet, but as my condition deteriorates, I will still be able to be safe and clean when I go to the toilet.”