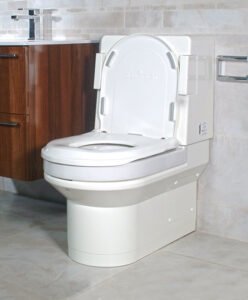 It is the latest achievement for the 18 year-old and demonstrates his determination to succeed, following his move into his own adapted new apartment, and breaking his arm within days of moving in.

“Despite the broken arm, he refused to accept help,” said Dan’s mother Sandra. “He is SO determined; it was a massive help to his ability to prove his independence in that he had had the apartment’s bathroom specially adapted, to be a wetroom with a Closomat toilet. As a result, he was able to carry on and undertake even basic hygiene unaided. “

The Closomat, manufactured in Britain, looks like a conventional toilet, but has built-in, unique simultaneous flushing and douching, and drying facilities. The Closomat can be used as a traditional WC; additionally, pressure on the flush pads whilst seated triggers the douching and drying process. As a result, users (or their carers) do not need to manually cleanse to be assured of optimum hygiene. Dan’s Closomat also has a touch sensitive switch, eliminating the need for physical strength to operate the toilet. He also has a maintenance agreement with Closomat, giving him further peace of mind that the toilet will continue to function effectively: some Closomats are still in daily use 30 years after they were first fitted, as a result of regular servicing.

Adds Sharon, “Dan says the two most important things to him are to be able to go to the toilet without help, and eat (not at the same time!) The Closomat is vital to his being able to even contemplate living on his own. He first had one at boarding school (Treloar College), which is where he was first introduced to Boccia, and insisted we had one installed at home too, so it was inevitable he would want one in his own home.”

Closomat is the first choice for disabled people and their carers, to deliver quality, easy to use toileting solutions that bring greater independence, dignity and hygiene.
Stephen Edwards, Head of Sales and Marketing