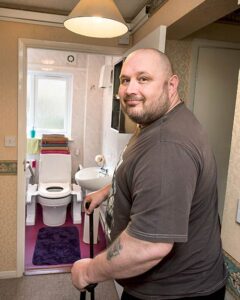 Who would imagine that a toilet could bring peace of mind to a whole family?

That is what has happened in the case of Rob Cain, who has, among other conditions, peripheral neuropathy, inflammatory bowel disease, fibromyalgia, and arthritis. As a result the 50 years-old former Royal Fusilier has little mobility, nor feeling in his hands- a cause of concern for the divorcé’s two young daughters, who worry about how he copes and his safety when they are not around.

Initially Rob was provided with a commode. Despite different seats, frames and hand rails, his impairments meant he kept falling when transferring, particularly when reaching for his walking sticks. But, with the installation in his wetroom of a Closomat Palma Vita wash and dry toilet with Aerolet Tilt toilet lifter over, he can now go to the loo whenever he wants, without help, safely and with dignity.

I’ve not fallen once when going to the toilet since I’ve had the Closomat kit. Yet I didn’t even know there was such a thing as a Closomat until about six months ago. Now I can go to the toilet safely, with dignity. The psychological impact on my mental health is amazing!

It’s given my girls peace of mind. They really worry about me, and like to know Daddy is being looked after. They are my heart and soul, so it’s good to be able to give them reassurance.

It’s something you take for granted, going to the toilet, yet everyone needs to do it. My girls use it as a normal toilet. I of course use the douching and drying: I have little feeling in my hands so it is difficult to clean myself. Now I have the peace of mind that I am clean which is particularly an issue with my IBD.

Coping with a ‘life-changing’…