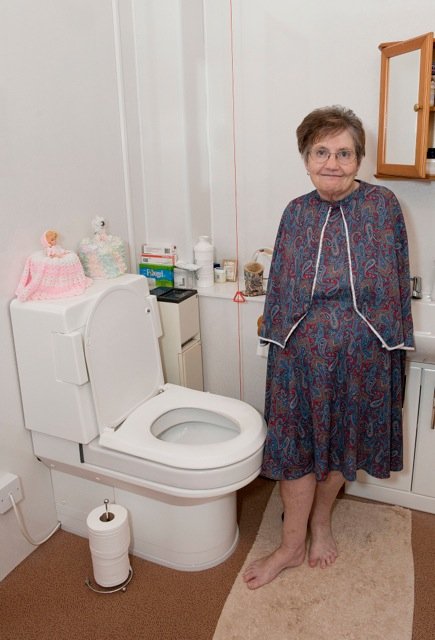 arilyn Carr, 71, has made it a mission to demonstrate her lack of limbs does not stop one living a full life: she drives, had a full time job throughout her working life, and starred in the first colour television documentary, which featured her and Douglas Bader, comparing how they had both overcome their disabilities.

Her only concession to her age and physical difficulties today is a wetroom, complete with Closomat Palma Vita wash and dry toilet that has in-built douching and drying facilities, meaning the user does not have to manually cleanse (or be cleansed).

“I fought against it for years,” she says. “I didn’t want to be so dependant on it that I couldn’t go to friends’ houses. Now I have it, it is brilliant, a Godsend.”

Initially, her local Council only agreed to fund the Closomat because she had been in hospital with a bowel issue, and her surgeon insisted it was vital her buttock was kept clean. As a result, she had a Closomat Samoa fitted, with a back bar flush. When an upgrade was recently required, Closomat realised that because of my bowel issues, I was spending a long time sat on the toilet, and might want to lean back: that would have unnecessarily triggered the flushing, douching and drying, so they recommended a new Palma Vita with soft-touch operating pad.

Explains Marilyn. “I don’t know how I would cope without my new Closomat now.”

Closomat is the first choice for disabled people and their carers, to deliver quality, easy to use toileting solutions that bring greater independence, dignity and hygiene.
Stephen Edwards, Head of Sales and Marketing