A comparatively small change to the bathroom five years ago is enabling a London couple to retain their independence despite deteriorating conditions. 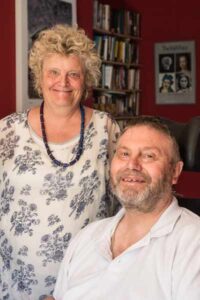 And the alteration has been so beneficial, the whole family use it, and now they have duplicated the equipment downstairs.

The adaptation has been replacement of the conventional WC with a Closomat Palma Vita shower (wash & dry) toilet, coupled with an Aerolet Vertical toilet lifter- also from Closomat.

Andrew Douglas (62) originally bought the assistive technology, on the advice of his Occupational Therapist, to help him retain his independence and dignity when going to the toilet, following the onset of Inclusion Body Myositis- the most common inflammatory muscle disease in older adults, which has affected all of Andrew’s main muscle groups.

“My loss of mobility meant I found it increasingly difficult to get on and off the toilet, and achieve personal cleanliness without help. I was very keen to maintain as much dignity and independence as possible,” explained Andrew. “When my OT advised a wash and dry toilet, we researched the different ones and concluded the Closomat was the best option in terms of quality and service.”

As his condition has deteriorated, to the extent he can no longer get upstairs, he has had a downstairs extension built at the Catford family home, specifying an additional Palma Vita and Aerolet for the en-suite.

“We chose to install the second Closomat because we were so pleased with the first one!” he said. “We decided to keep the upstairs Closomat even though I no longer need it: my wife and daughter have both come to appreciate the hygienic benefits of the Closomat.”

Now, with his wife Avril’s development of arthritis, the upstairs bathroom has been remodelled, with the retention of the Closomat fixtures.

Added Andrew, “As part of the refurbishment of the upstairs bathroom, we replaced the flooring, which meant the Closomat and Aerolet had to be removed, then re-installed. We were delighted with the Closomat’s speed and efficiency with this. It was done with less disruption than we anticipated, and we were very impressed with Closomat’s focus on customer service.”

The icing on the cake